An Upswing On The Way 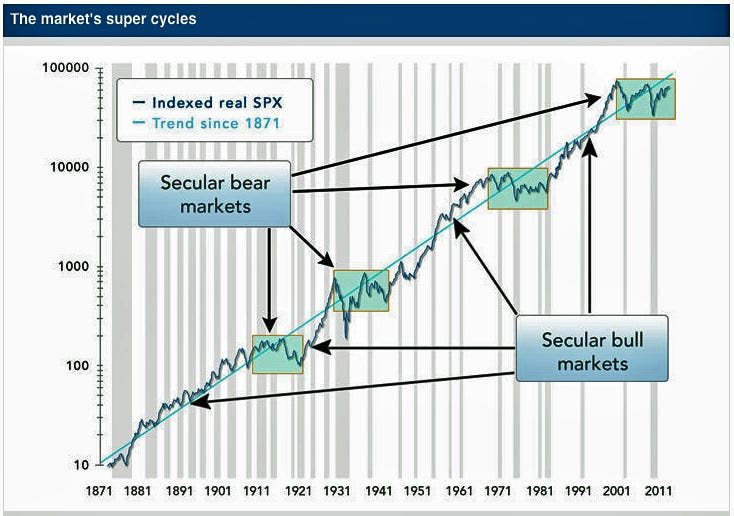 Source: We Could Be Witnessing The Dawn Of A New Stock Market Super Cycle

You add the time dimension to Big Data and you get Long Data. Long Data is still Big Data.

crunching big numbers can help us learn a lot about ourselves. ..... But no matter how big that data is or what insights we glean from it, it is still just a snapshot: a moment in time. ..... as beautiful as a snapshot is, how much richer is a moving picture, one that allows us to see how processes and interactions unfold over time? ..... many of the thi
ngs that affect us today and will affect us tomorrow have changed slowly over time ...... Datasets of long timescales not only help us understand how the world is changing, but how we, as humans, are changing it — without this awareness, we fall victim to shifting baseline syndrome. This is the tendency to shift our “baseline,” or what is considered “normal” — blinding us to shifts that occur across generations (since the generation we are born into is taken to be the norm). ..... Shifting baselines have been cited, for example, as the reason why cod vanished off the coast of the Newfoundland: overfishing fishermen failed to see the slow, multi-generational loss of cod since the population decrease was too slow to notice in isolation. ..... Fields such as geology and astronomy or evolutionary biology — where data spans millions of years — rely on long timescales to explain the world today. History itself is being given the long data treatment, with scientists attempting to use a quantitative framework to understand social processes through cliodynamics, as part of digital history. Examples range from understanding the lifespans of empires (does the U.S. as an “empire” have a time limit that policy makers should be aware of?) to mathematical equations of how religions spread (it’s not that different from how non-religious ideas spread today). ...... building a clock that can last 10,000 years .... the 26,000-year cycle for the precession of equinoxes ...... Just as big data scientists require skills and tools like Hadoop, long data scientists will need special skillsets. Statistics are essential, but so are subtle, even seemingly arbitrary pieces of knowledge such as how our calendar has changed over time

Search is, after all, the fundamental operation on the web. Steve Jobs left the PC to Bill Gates when he returned. But there is no post-Search like there was a post-PC. Search is here to stay. She does not have to become number one. All she has to do is become a strong number two and shine elsewhere. Mayer seems to be saying the Yahoo search results are already pretty good, but search results presentations could be vastly improved.


Yahoo search was one of three parts of the company Mayer called out as in most urgent need of an overhaul, along with Yahoo Mail and the Yahoo.com homepage ..... by far the most lucrative business at Google, where Mayer once headed its search product ..... All of the innovations in search are going to happen at the user interface level moving forward and we need to invest in those features both on the desktop and on mobile .... Yahoo, presumably, can improve its search engine by simply wrapping Microsoft’s search infrastructure in an improved user interface. ..... Yahoo helps power searches on the Siri digital assistant included with Apple iPhones and iPads.

The top phone in the market right now is back. Go get it. Nexus 4 is back. Nexus 7 is also in stock.


at one point some $57 billion was wiped off Apple’s market capitalisation, roughly the equivalent of the entire value of Ford, a carmaker..... First, Steve Jobs, Apple’s founder and creative genius, is dead. The iPhones and iPads he sired still generate gargantuan profits. But his successor, Tim Cook, has yet to prove himself capable of bringing new breakthrough products to market. Second, Apple’s fantastic profit margins—38.6% on sales of $55 billion—attract competitors like sweetshops attract six-year-olds. ..... The firm’s price-earnings ratio—11.6 at close of business on January 23rd—is not much different from Microsoft’s .... Only one of 60 analysts tracked by Bloomberg had a “sell” recommendation on Apple before this week’s stockmarket fallout. ..... Apple bungled the introduction of its new mapping app, and there were rumours of cuts in component orders for the iPhone 5. ..... Apple could produce an iPhone for less than $150 to broaden its appeal. .... the best way for the company to prove it is not past its prime would be for it to disrupt another big market ..... All eyes are on television (though Apple is also exploring the potential of other markets, such as wearable computing ..... Competition is now tougher in its core markets. Rivals will not let it disrupt new ones so easily. ..... Apple won’t crumble, but it has peaked.

Suing Samsung was the beginning of the end of Apple. That was Apple saying it was not going to innovate anymore, not fast enough, not for enough people. Apple suing Samsung was a symptom.

Apple messing up maps on the iPhone was also a symptom. Apple firing Scott was another symptom. Scott messing up maps was Scott telling Tim Cook, you are no Steve Jobs. If Scott had apologized as Tim Cook had demanded Tim Cook would have kept him around? That is not the tech way. It is not about apologizing. It is about "simply working."

Apple is no longer in the lead in either the smartphone or the tablet space. And it is not going to be able to do TV. Apple is done. To put it politely, Apple has matured.