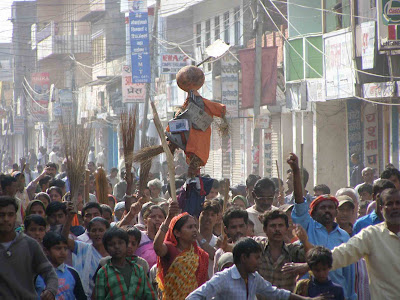 Web 3.0 - Wikipedia technical and social possibilities identified in this latter term are yet to be fully realized the nature of defining Web 3.0 is highly speculative. In general it refers to aspects of the Internet which, though potentially possible, are not technically or practically feasible at this time.

When I tried to explain to a friend the Web 5.0 concept he said, but that is like repackaging hello.

I said, but Starbucks has been repackaging coffee. But Web 5.0 is more than saying let's get offline, let's get off the phone, let's meet in person, face to face. Web 5.0 is the stuff of revolutions. Web 5.0 is about face time, but it is also about mass group dynamics, it is about tens of millions engaging in concerted street action to pull down dictatorships. It is about grassroots organizing in an established democracy to take over the highest office in the land.

Web 2.0, Web 3.0 and Web 5.0 together could turn China into a federal, multi-party democracy. Web 2.0, Web 3.0 and Web 5.0 will bring forth a total spread of democracy in the Arab world, the only thing that will. Missile strikes will not. You are looking at a scenario where the tech industry will compete with the military-industrial complex. There is a grassroots way, there is a war of communications technology way to spread democracy.

* In 1999 I was one of the founding members of a dot com company that went on to raise $25 million during its second round before it went down during what in the industry is known as the nuclear winter. I was also team member number two of another dot com that sought to challenge then industry leader AllAdvantage that paid people for watching ads while surfing the web. That company also closed shop once the nuclear winter set in and there was a massive dot com meltdown. The founder Paul went on to Duke.

* The king of my country pulled a coup in February 2005 and took over. The country already had gone through a decade long civil war led by the Maoists in which 13,000 people died in active combat, twice that many committed suicide. The Maoists of Nepal had proven themselves to be the largest, deadliest ultra left group this planet saw since the end of the Cold War. At their peak they had 80% of the country.

In February 2005, three forces in Nepal were at loggerheads: the monarchists, the Maoists, and the democrats. Since February 2005 no Nepali outside of Nepal has put as much time into the democracy movement of Nepal as I have. I was so busy thinking about the 27 million people in Nepal - days, nights, weekends, it was a zombie existence - I literally was not thinking about myself. There would be piles of unopened mail on my floor. The work I have put into Nepal's democracy and social justice movements is going to win me the Nobel Peace Prize. It could happen in 2008, 2009 or 2010 by the latest. If it happens in 2008 or 2009, I will have broken MLK's record.

What happened in Nepal in April 2006, January-February 2007, and February 2008 was magic. If Nepal can become a multi-party democracy of state funded parties and one where at least one third of the legislature is female by law, what happened in Nepal during those three mass movements will have been the French Revolution for this 21st century.

More than 40% of the people in Nepal are Madhesi. Of the 30,000 Nepalis in NYC, maybe 30 are Madhesi. That should tell you of the filters in Nepal that work against the Madhesis.

I am half Nepali, half Indian by birth. More than 99% of the Nepalis in America are not my ethnicity. More than 99% of the Indians in America are not my ethnicity. I need to point out the ethnic politics in countries like Nepal and India are way more complicated than the racial politics in countries like America. Barack did not have it tougher growing up.

* Barack knows me, as does Howard Dean. Terry McAuliffe knows me. I have a feeling the Clintons might be aware of my presence. All the top politicians in Nepal know me or of me.

* In April 2006, over a period of 19 days, about eight million people out of the country's 27 million came out into the streets to shut the country down completely to force a dictator out. The Maoists wanted to take credit but they had been pushing for an armed uprising all along. The seven democratic parties kept pushing for a mass meeting here, a mass meeting there, a daylong shutdown here, and a daylong shutdown there. I am the father of the concept of continuous movement in the Nepalese context. I pushed the concept from the very beginning. If there is a tortoise sitting on the fence, chances are it did not randomly get there.

* When Upendra Yadav, now leader of the largest Madhesi party and fourth largest party overall after the April 10, 2008 elections to the constituent assembly in Nepal, landed in Los Angeles in July 2007 for the annual conference of Nepalis in America, his first words were "Where is Paramendra Bhagat?" They took him to the hotel. He again asked, "Where is Paramendra Bhagat?" They had to fly him over to NYC to meet me.

I was at a Nepali event in Jackson Heights in Queens. Some MPs from Nepal were on stage. I was sitting in the front row. Hundreds were in attendance. In the middle of the program one MP got off stage to come sit one seat from me to get his picture taken with me. Then he got embarrassed and said he was trying to get the crowd into the background of the picture.

In February 2006 Madhav Nepal, then leader of the largest political party in the country, was put under house arrest by the royal regime. A month later he managed to come online wireless. His brother lived in the house next to his. The first person he contacted was me. We chatted on Google Talk. Madhav Nepal is a Pahadi.

* Nobody in the Nepali diaspora put as much time, effort and talent into the democracy movement in Nepal as I did.

* I am the un-Bin Laden. I mean no disrespect to Christianity and Christ and if I use this metaphor it is because it is such a vivid one. Bin Laden is the anti-Christ, I am Christ. If 9/11 has been the modern day Pearl Harbor, the first major revolution of the 21st century happened in Nepal. Between eight years of a Barack-Hillary presidency, a possible Mayor of NYC who will get behind my idea of a new definition for voting rights in this city to engulf everyone who lives inside the city boundaries, and my tech company that will work to get hundreds of millions of new people online, I think you are looking at a total spread of democracy by 2020. The day all Arab countries have been turned into democracies is the day the War On Terror ends. There are two aspects to that war. There is the part about killing mosquitoes. The US military, law enforcement and intelligence agencies working with their counterparts in other countries get to kill mosquitoes: that is not my area of expertise. Someone like me helps drain the swamp. Everybody you need to spread democracy everywhere on earth lives right here in New York City. America needs me, and America needs me to be in New York City.

My company is the best thing I could do for my country and countries like mine. Not everyone has to come to America like I did. The Internet is what will bridge the gap between the First World and the Third World, between the west and the rest. I could not work on my company in Nepal. I have to be in New York City to grow my company. I am going to list my company on NASDAQ. I am going to turn this into a Silicon City. I am going to be the reason the center of gravity of the tech industry shifts from California to New York.

* Warren Buffett once said he could not be CEO of General Electric. My management and leadership style by now places a heavy emphasis on Web 2.0 and a heavy consumption and production of mind food. The worlds of academia, media, politics and business are seamless. I might have more in common with a theoretical physicist than your stereotypical MBA.

* America is a concept, America is an idea, that concept, that idea is democracy, it is the market mechanism. When was the last time an immigrant into America played a larger role for democracy and social justice in his country of origin and intends to play a similar role for all countries that are not yet democracies? The medium is not the message, but my role would not have been possible before the advent of the Internet. I am a new breed revolutionary intending to wage wars with communications technology. I am a digital democrat. I am the un-Bin Laden. Neither of us seem to need states or standing armies. He is for violence. I am for nonviolent militancy, the kind where you shut a country down completely for three weeks to bring a dictator to his knees.

* Revolutionaries like MLK, Barack and me
We create new space
People like Rangel fill up that space
Over decades

I moved to NYC in the summer of 2005. I poured a few years into Nepal's democracy and social justice movements. Then I was one of the earliest Obama volunteers in all of NYC: Barackface. From doing those two things to now having become a full time tech entrepreneur is not a career switch. There is a very concrete mathematical theory called the butterfly effect. My application of it has been cutting edge.

I am going to compare that Web 5.0 achievement to the search algorithms of the two Google founders.

There are three buckets of paint, the three primary colors.
The first two are my strengths, engineers you hire.

The Nobel Peace Prize 2010 has to go to Nepal. It perhaps will be shared. The three mass movements will see their climax in the new constitution by the summer of 2010. Then the time will be ripe. I intend to lobby hard.

The talk of the center of gravity in the tech industry shifting from California to New York is less about how wonderful I think I am as a person, and more about the Web 2.0, Web 3.0, Web 5.0 classification. As the web matures to the higher planes, NYC stands to cash its advantage. People from every little town on earth live here. This city is the Amazon forest of humanity. And that is why it is going to be key to Web 3.0 and Web 5.0. It is about the city, not me. It is just that I want my company to play a role.

My Third World People Don't Get To Vote In This City

Anonymous said...
This comment has been removed by a blog administrator.
9:24 AM

Anonymous said...
This comment has been removed by a blog administrator.
12:23 AM

Anonymous said...
This comment has been removed by a blog administrator.
12:57 AM

Anonymous said...
This comment has been removed by a blog administrator.
1:25 PM

Your imagination is unparalleled. Best wishes for the tech-startup.