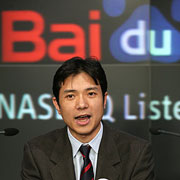 Robin Li has been caricatured, and he continues to be caricatured. But his is a true success story. Not all of the difficulties associated with doing business in China can be attributed to China being a one party state. The Chinese are like the Jewish people. They both have 5,000 years of non stop history. The Hindus have 10,000 years of non stop history, but that is another story.

Robin Li came up with the search algorithms before the Google guys did. He has a patent to prove that. And he has given Image via Wikipedia a laser beam focus to the Chinese online population. The Chinese language is not a small hurdle.

The China Debate: The Other Angle