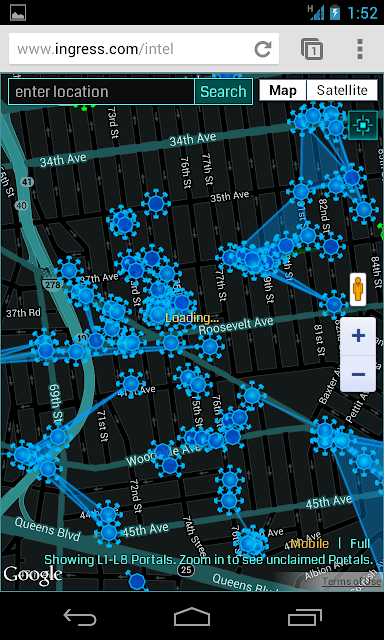 Yesterday afternoon this guy tomhuze (Ingress handle) and some of his team members spent an afternoon reporting on half the portals in my neighborhood of Jackson Heights in New York City. This is only the latest step in a vendetta campaign that has been going on for weeks now. We are both blue agents.

I have largely built my home territory of Jackson Heights (Ingress: I Can Retire Now) with enormous work over months. By now I believe it is the top home territory in the city, in terms of how many portals it has, and the diversity of portals it has. You can find L1-L7 portals in the territory on most days of the week. It is the top Ingress destination in Queens, for its central geographical location and for the large number of portals. I hope to make it even better: I expect more portals to go live, I expect more close clusters to emerge, and I expect to make more portal submissions, especially all along the 7 train track for what I call "the Disney experience," so agents on both sides can play the game while riding the train. I think it is going to be the top Ingress experience in the city.

A home territory is one where the majority of portals are your submissions. It is not the territory you happen to live in.

I urge you to disregard all his requests to wipe out my portals. They are all legitimate submissions of churches, sculptures, artwork, paintings, murals and so on. Their geographical locations get captured by the camera itself, as you very well know. These portals that have doubled and tripled in count have greatly enhanced the gameplay for local and visiting agents on both sides.

And I would like to point out that my top request right now is that you add a Block User feature for the COMM. The COMM has got to be the least refined feature of the Ingress gaming app. And add a third section. There is All COMM, there is Faction Chat, and there is a need for a private section. Only people you explicitly approve are part of that private section. Kind of like on Facebook you have your social circle, I have mine, and we might even have some mutual contacts. Each agent's private COMM would be unique to that agent.

I believe until you add the Block User feature I am just going to avoid the COMM like I did all the way to hitting Level 8, but back then it was because all the handles and portals came across as gibberish to me. Now it is because there is just too much noise and pollution on the COMM, too much small talk and name calling, bitterness and outright harassment.

So this guy calls himself leader of the NYC Resistance. The vast majority of agents on both sides are not members of organized groups. You can play this game just fine on your own. I only discovered the group after I hit Level 8. Most challenges in the game are on the way to Level 8. Active members are people who show up for your events. Last I knew maybe 15-20 people showed up for his events. That is out of hundreds of agents in the city, soon to go into the thousands.

I think enhancing the social aspects of the game is a good thing. And dudes like tomhuze have put in a lot of work into bringing forth that social experience for people who like that kind of social experience that seems to be heavily organized around drinking beer, attending L8 farm events and going to destroy only high level portals. There are some values that the group has come up with, for example this weird idea that AP does not matter after you hit Level 8. After you hit Level 8 it is more about just plain hanging out with other Level 8s. To each his her own.

We had a falling out a few weeks ago and I am no longer a part of his G+ groups. Since I have focused on building my home territory to go on to build a Resistance team of my own with a different value system. There are only two global teams possible. But you can create as many local teams as you want. Team building is the ultimate challenge in the game, I believe.

Ingress should not be made into a complex game if Niantic is to meet its goal of taking this game to a billion people. By the way, guys like tomhuze happen to think "everyone who wants to play this game is already playing it and when the game goes public maybe the numbers will go up by a factor of two or three at most," a view I strongly disagree with.

But it should be possible to find new challenges in the game, and a lot of that is to do with team building. When you build large, complex teams you can organize large, complex events, and that option should be there. But right now that is the app's weakest link in the chain. It is because the COMM is so poorly designed. I once blogged months ago that Ingress could emerge a major force for world peace. But right now I am thinking it might start new wars! Social filters ought be an option.

And, by the way, I love Google like some people love Apple. You can just do a search on the company's name at my blog and you will see that. (Google Balloon: More Promising Than Google Fiber, Google Glass And Google Car)

In 2010 a blog post I wrote inspired Fred Wilson to put forth a blog post on the same theme that became his most popular blog post for that year, called Mobile First. Ingress is way more than just a game for me. It brings mobile, gaming, local, global, and social -- some of the major trends in tech over the past few years -- all together and so I see it as a major window into the future of tech itself.

This guy's biggest contribution to the game in the city is his whole secrecy paradigm. People are doing L8 farms better everywhere else in the world but he thinks it is a concept he came up with. That paradigm dominates the thinking in both teams in the city and that is why New York City is nowhere on the global Ingress map. I hope to change that. I think both teams should actively blog about their exploits and adventures and should make attempts to become part of the official Ingress report. Our falling out was on this matter.

I have been a fairly passionate player, I started on February 1 and am currently past six million in AP.

Looking to forward to keep working on my home territory, and looking forward to building my team once you do your part and rework the COMM.