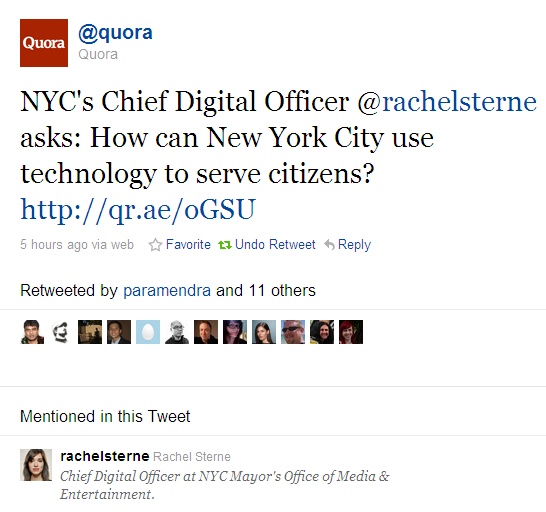 Oh Ms. Sterne. If you will please excuse me. I totally misunderstood your new job title. Please ignore my last letter. It is called growing up in Nepal during the days of absolute monarchy.

Let me take another crack at the situation. I think this is about social media. I visited the Quora page to make sure.

Your question essentially is how does the city government "get" social media? The short answer is pick the top social media platforms - Twitter, Facebook, Tumblr, Blogger/Wordpress - and get as many city officials at all levels of city government on them as possible. You yourself have to be the top user, of course, since you have to set an example, but I doubt that is going to be a problem.

What could prove challenging is "selling" the idea. And it might get harder as time passes. You will not be the new face to the administration for too long. A few weeks from now there will be another big hire. The news hounds will move on.

So develop a strategy, get the key top people to back you, and use that authority to show up at many people's offices.

Twitter is key. Facebook comes next. Tumblr and Blogger/Wordpress get a little complicated for many people. Every little department in the city needs to get its own Twitter handle. You might be looking at 100 Twitter handles. Someone like you would curate and create lists. Once created you would make sure someone in that department is actually bothering to tweet for at least 20 minutes a day. They don't have to read and respond to all tweets that come their way.

One word of caution. If a department or department chief urges you to manage their Twitter page or Facebook page, they are obviously not converts yet. Don't give in to them. Take another crack with them later. They have to carry their own water.

But the bigger step to take is to get the city to release as much data as possible so developers can create apps around them, so it becomes easier to navigate the city. The city and the feds have already been taking steps in that direction. Do more. Release more. Developers have already been on it. See if you can catalyze the situation.

Maybe you should hire some people on your team who will work full time to create data visualizations. Help ordinary citizens understand the city budget. Make it super easy.

Provide greater access to the media. Old media is important, but so is new media. Bloggers need to be encouraged to blog about the city government. The Mayor gets to be on TV. City officials at all levels deserve to get featured on some blog or the other. I myself hereby volunteer to interview one of them: The Mayor. I have only two questions. (1) How do you become a billionaire? (2) How do you become Mayor?

As for things the city could do for the tech community, the number one on the list is to get every New Yorker to 1,000 gigabits per second internet access.

But stay away from partisan political wrangles. I don't get the impression that is part of your job description.

And, really, please do excuse my last letter. It was written in haste.