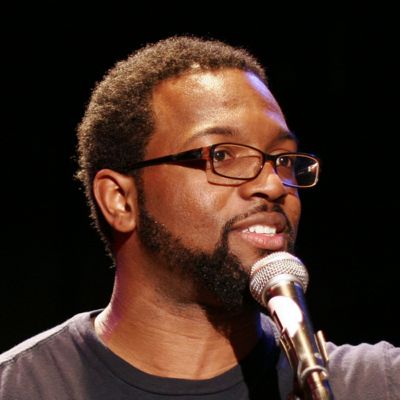 I first saw a Facebook update from him. I already had plans for the evening: yet another tech Holiday Party. So I sent him a tweet. Can't make it. Then I sent another tweet an hour or so later. Tempting, I said. Finally I decided to go to both.

So I was at Suspenders, 111 Broadway, for the first part of the evening at a Girls In Tech event: fabulous. Then I went to Bar 82. I instinctively worked the room, went from table to table to table. Baratunde must have noticed. He got me sitting in the front row. I felt special. Then I realized noone else was sitting in the front row. It also meant the final comic for the evening got to pick on me.

And the guy went on a tangent. Then when I clarified it was a for profit, high tech microfinance startup, he asked if it was kind of like Kiva?

"I love Kiva, but they are a non profit. We intend to be for profit."

He went on another tangent.

"This guy is a Jew," he said. "He wants to make money off of poor people."

The comic himself was Jewish.

I introduced Baratunde to a Cornell student. "This is the brain behind The Onion." She got impressed.

The guy had to crack up an "Asian" joke. Now I knew why he had me sitting right in the front. So he could crack an Asian joke. But then in America Asian does not mean Indian. Indians are Indian. Asian is Chinese, Korean, Japanese, Vietnamese, Burmese even. But not Indian.

So he used his iPhone to figure out Brooklyn Bridge had the best traffic. His Asian cabbie liked that.

The show over the guy is standing by the door with a green trash can in his hand. I am like, this looks familiar, I have seen this in the subway. I folded a dollar bill to make it look like a Benjamin, and I dropped it in there. That is the Asian way.