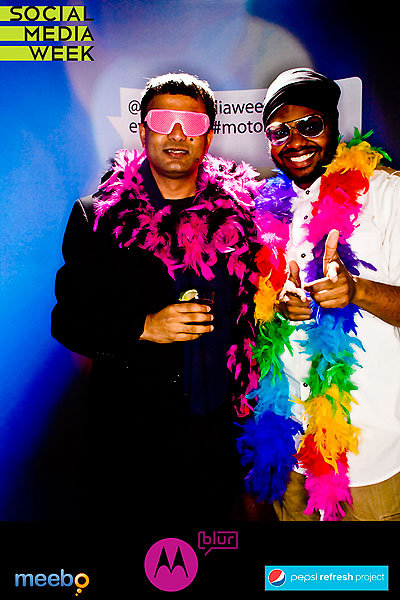 Livestream Videos From The Week

I heard about the Social Media Week (@socialmediaweek) at the January NY Tech MeetUp - Scott (@heif) announced it (I became friends with Scott when I was new in town and the NYTM was less than 10 people at a bar on the Lower East Side, I told him meeting him was like moving to LA and meeting Tom Cruise, for me, since MeetUp

took off with Dean 2004, and I - and Barack - were Deaniacs; I was predicting a Barry Goldwater, Ronald Reagan

thing for Dean, but did not realize it would happen so soon; Dean 2004 was organized around MeetUps) - so it is only fitting I talk about the week within a NY Tech MeetUp framework.

I did five events on Monday, the first day, starting with the press conference early in the morning, and I didn't even have a press pass.

"Are you sure? Because I did RSVP."

I did 14 events in all. The founder of Social Media

Week Toby (@tobyd) was impressed. That is how I got into the final event of the week, the fabulous party Friday evening. I danced the way I like to: I gotta sweat it out.

After having checked into Grand Central

a few times, I started feeling like maybe I am running for Mayor of Grand Central. But I am pretty sure some daily commuter is Mayor of that big, fancy place.

Week started with a new friendship with Jacob Brody (@anwaraizer). This white guy actually raps! He has his own rhyme down. He is with VentureBeat. I showed up at the Paley Center. I was not in a mood for breakfast, but figured some orange juice

"I was looking at you because you look awfully like a friend of mine by the name of Sam ..."

We talk along. He mentions the First Round Capital guy. I said I have met him, briefly. He presented at the New York Tech MeetUp after a day spent with entrepreneurs. A few people accompanied him that day. Jacob said he was one of them. Miko Mercer was another. And, of course Jacob also knew Miko. (@mikomercer) Miko is with a company that sounds like it might be a militia organization.

Jacob and I went together to our next event.

Drop.io is kind of like MeetUp, kind of like FourSquare, only older than FourSquare. These are serious tech companies on their way to becoming global brand names

and in the process putting New York

squarely on the tech map.

Dropio is in Dumbo, Directly Under the Manhattan

Brooklyn Overpass. Their office space is great. It is a loft. I just love the idea of all that open space. The whole block or two, the building, the whole space felt like a blank canvass on which tech startups could congregate, grow, mature, take off. The locale has that tech startup feeling.

Companies like Dropio are the bridge from the current PC era to what I call the IC era. And it has been and will be successful, but it will have to reinvent itself as a company once the transition is mostly done and we are squarely in the IC era. IC, Internet

I had tweeted back and forth one or two times with one Dropio guy during the weeks prior: @sgreenwood. So before Jacob and I enter the Dropio space, we decide on a quick restroom run. You never know. Out comes some Sam. Jacob being the VentureBeat guy recognizes him. "Hey Sam!"

Did I hear Sam? I am thinking this is it, this is that Greenwood fellow.

"What is your last name?" I asked. He said something not Greenwood. False alarm, I figured. Later I realized that was Sam Lessin (@lessin), none other than the founder of Dropio. A few days later I also found he runs a great MeetUp that is rather large that I had never heard of before.

I finally met Steve - not Sam, it just so happens - Greenwood at the party Friday evening. I had seen him at a few events, his face looked familiar, so I approached him. What's one more introduction after having done 14 events, I thought.

Once he said he was with Dropio, I asked him what his name was. When he said what that was, I said, no kidding, we have tweeted back and forth before. I shared the Sam Lessin story with him. He thought that was hilarious. He shared with me that a lot of people think the two are brothers. They just go ahead and assume.

"So which of you is the older brother?"

I thought that was so funny.

Before I left the Dropio event, I had a small chat with Lessin. Hey, drop by any time, he said as I parted. It sounded like poetry, considering what the name of the company he founded is. When they run out of files to drop, what if they start dropping people, real people? I think I will stay away. I will go to his MeetUps though.

"Why did you do this, of all the other things you could have done? Why file sharing? Why this particular thing?"

He said there were three considerations. I forgot the first one. The second one was, it had to have been a billion

dollar market. Three, Google should not get into it. If I needed proof Silicon Valley won the dot com round. (Presenting At The Dot Com Hatchery)

Week was my FourSquare week. I was checking in left and right.

There was a Haiti related event Monday afternoon at the New York Times, Andrew Rasiej (@rasiej) moderating. It was a powerful event. I got to ask the first question later. Ann Curry

was on the panel. I stayed around to meet her in person later.

"I am sorry, but I have never owned a television. I first learned of your existence when I was watching videos

online from the 140 conference. I was very impressed. So I am honored to be meeting you in person like this."

I get the impression she is major on TV. How major? Does she read news every night?

She (@anncurry) now follows me on Twitter. You better believe. She has over a million followers, and she follows about 650.

I was a few minutes late. I took my seat. Later we both realized - about 40 minutes later - that I had randomly placed myself right in front of Vamsi Sistla. (Whuffie: Vamsi Sistla) He had to leave early, so I stepped outside for a few minutes for a brief chat, and to say hello to his two Indian friends. Vamsi is a good guy to know when you are in the process of raising early money. Vamsi called me up the following morning and gave me some great fundraising

Scott was on stage. I have never seen this guy more impressive, on stage, in person, or one on one. The dude was in his element. He gave a great talk and set tone for the rest of the evening. The talk was uplifting, and bold. At one point he said, "some stupid iPhone

app you might be working on." The guy is a die hard Steve Jobs fan, so don't get him wrong. It is just that he feels tech entrepreneurs should look to solve some real problems, the bigger the better.

My personal favorite was: * Jacqueline Novogratz, Acumen Fund http://www.acumenfund.... Though I thought both Scott Heiferman and Clay Shirky spoke well, and the Choir was all energy.

At the after party I got to meet Shana (@shanacarp) who made it official: she is the number one commenter at Fred Wilson's blog, my favorite solo blog, AVC.com. Also met Carmen Magar: I told her Magar was an ethnic group in Nepal. Summer

I met a guy at that first press conference who was wearing a shirt that shouted out loud: I Love

Black Women. He got me into a Wednesday event in Harlem that was full but that I wanted to get into. I got there. It was the fanciest venue of the week. L Martin Johnson Pratt is the name.

Women In Social Media: The Panel

This was the old Bear Stearns building, now JP Morgan. 98% of the audience was female, and later I realized 1.5% were panelist boyfriends. I felt special being there. Collectively speaking this was the most impressive panel of the week. Neha Chauhan - that is an Indian name - moderated. Alexa Hirschfeld, Meghan Muntean, Casey Carter, Jordan Reid were on the panel. I am now Facebook friends with two of them. Thanks for accepting. (@caseyscarter, @jordanberkow, @meghanmuntean)

I asked my question to Casey: "I have been blogging for years. I have a lot of followers on Twitter, actually I have more followers than Donald Trump, and I log into Facebook

every day. So I feel like I have been eating all my vegetables. But I am not on Tumblr. Do you think I am missing out?"

She said yes, pretty much.

I met another guy at that first press conference event who approached me like he knew me, although we had never met. I got to ride around in a small van through large swathes of Brooklyn

Thursday afternoon and for a few minutes got to sing something I did not think I was capable of. This was the most out of the box event of the week.

I met Joe and Iara again at the party Friday, them and one singer who is perhaps a regular on the Dollar Van Demo. That party is where the picture up top comes from.

I got introduced to Vacanti last year over email by a Morgan Grice who I have never met. Finally I got to meet Vacanti (@vacanti) in person at Sunshine. He was on the panel.

I saw Toby at the press conference. I talked to him the following day at the Personal Democracy

Forum event. He asked if I was going to the next event - the NY Tech MeetUp - and I said yes. I saw him again at the New York Times

event Friday afternoon. I got him to put me on the invite list for the "by invitation only" party Friday evening. Who says it is crowded at the top? (Party Photos)

free food was great. The music was great. One particular clip hit close to home.

I met great people, one of them was The Onion guy Baratunde. (@baratunde) We have known each other a while.


I said to Baratunde, one day I was surfing around, and I came across this podcast where you had been interviewed by some kind of a morning show person, so I listened to the whole thing. I did not get to the podcast from your Facebook page, but just while surfing around.

"I talk a lot, and sometimes they record it," he said.

less often these days or something, but you don't seem to show up in my Facebook stream as often as you used to," I said.

He said he had hit the 5,000 friends limit of Facebook and he was pissed at Facebook. He wanted that limit lifted. Or he could try and use a Fan page thing, he said.