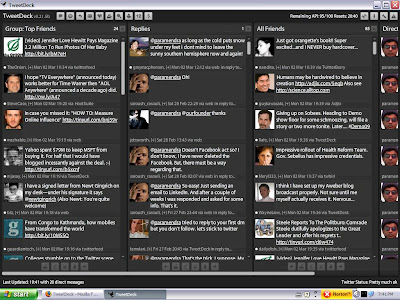 Twitter changed my life. Then TweetDeck came along and it changed my Twitter life. Twitter.com is you driving a car. TweetDeck, and you are in an 18-wheeler. You feel the power.

Bumping into great links, either to news or to information or sites - like Padmasree introduced me to Science Daily - is half the fun, the other half is bumping into great people. On Twitter I am a heat seeking missile looking for tech entrepreneur types. I have found some big ones, and several not so big ones, all exciting. Since I have never been a big fan of beer, this beats meeting them over beer. Or maybe not. I'd love to meet them in person. But Twitter is the only way for me to get to them one on one now. There is absolutely no other way.

But I am not just after celebrities, actually I avoid the non tech mini celebrities. Quite a few times I have ended up asking, excuse me, but are you someone famous? It is called not owning a TV.

One of my recent delights has been going on a Twitter world tour. And finding people in the top cities of the world. This beats New York City. In NYC you mostly see people from all over the world. On Twitter you actually interact with them, at will. I wish the NYC Subway were more like Twitter. I wish the subway was where you went for easy, impromptu conversations.

And, by the way, Brooke Ellison is a total sweetheart.
https://twitter.com/brookemellison/status/1273803450

I Speak More Languages Than I Thought I Did

I understand about 10 languages as is, six of them really well. But then one day I wrote to Steven in Chinese, he wrote back to me in Hindi. The guy does not speak a word of Hindi. In case you are wondering who Steven is, he is my very own personal emissary to China, my own Marco Polo, if you will.

I have tweeted in Russian, Portuguese, Spanish. To the world out there I say, bring it on.

Not long after I got on the flying saucer, I mean the TweetDeck, I went on a world tour. I went to some of the fanciest cities in the world, and checked out some of the top Tweets in those cities, started following some of them. My ranks swelled.

Since I really like to follow people I follow, I can't follow too many people. So for my next world tour, I think I will only visit cities and Tweet pages to read and comment. If some of that leads to me getting more followers, I am not complaining. Who wants to be a millionaire? Who wants to be popular?

Someone I met on Twitter who happens to have a Brown BA and a Columbia MBA is helping me find a top biz talent for my nascent corporate team.

If I had only one hour to spend, and it was a choice between Facebook and Twitter, guess where I am going! Facebook does not even compare in terms of the online experience of tweeting. Twitter is more fun than Facebook, it is more fun than email, heck, it is more fun than search. Search is work, Twitter is fun work. Twitter is the smartest career move I have made this year so far. And this is not fun you later regret, like the morning after a bad - as in badass - college party. This is fun and thrill, as in the fun and thrill of knowledge, networking, great company, the feeling of living life on the edge. There is the feeling of uninhibition. Twitter is a drink that quenches and makes you thirsty. 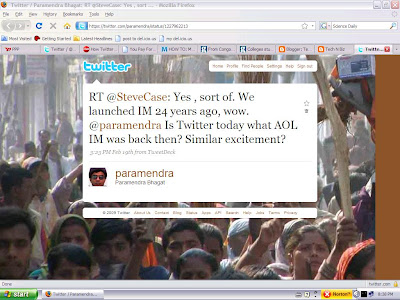