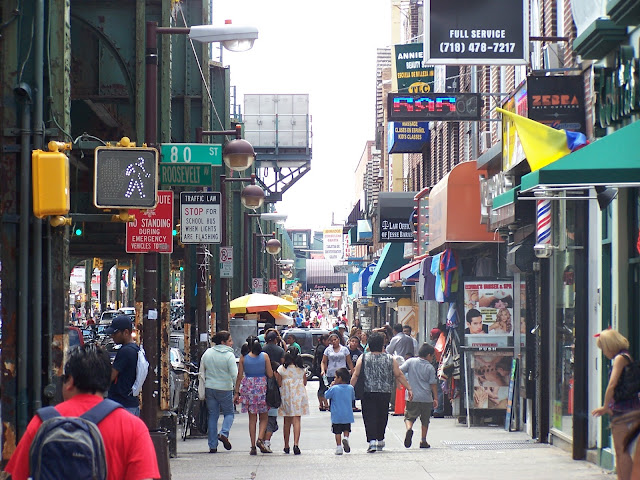 That is the number one reason I so dig Jackson Heights.

I have to frankly admit that Little India is also part and parcel of the appeal. But although the most happening part of Jackson Heights might look Indian, the locale is big and diverse. There is a huge Hispanic population. People from 50 different countries live here. Most people's idea of Jackson Heights is 74th Street. But the locale stretches all the way to 90th Street or thereabouts.

I guess it is cheaper than Manhattan. But then I know of a ton of Nepalis in Ridgewood on the L line - another Nepali stronghold in the city - who complain of not being able to afford to move to Jackson Heights, which is perceived to be more expensive.

"Ridgewood is a village," some Nepalis in Jackson Heights like to say.

Many events I go to tend to be in Manhattan. Once you get on the E or the F express trains, it is but 10 minutes to the Manhattan border. Long Island City and Jackson Heights are not that far apart when it comes to train distance. It is all in the mind.

Jackson Heights is the biggest train station in Queens. So if your work and life involve ending up in Manhattan often this place is perfect.

Jackson Heights is a city inside a city. You can have a near complete existence here. Broadband takes you everywhere, and you can walk around to seek some clients for whom you might do some tech consulting, some online marketing.

I am looking at a local restaurant - the top Nepali eatery in the city - a law firm and a grocery store to work some internet magic on. It is good to be grounded. It is good to have a few local clients.

And the air around here feels cleaner.

A few days back I discovered the local Buddhist temple while working on this blog post: Jackson Heights: My Neighborhood.

Every evening I have been going to a local mosque for dinner. My lunches have been at the local Gurudwara, both only a few blocks away.

When the holy month is over I will start cooking again.

The India-Pakistan partition was a painful experience. There are Pujabis who are Muslim and Punjabis who are Sikhs. There is a Punjab in Pakistan, and one in India. They paid a huge price when the partition happened.

For someone working to launch a microfinance startup, Jackson Heights is as good as it gets. No place in New York City represents the Global South better.

So yesterday I showed up at the Gurudwara for lunch and many elected officials - Congressmen, Comptroller - were holding a press conference in the front. They were there to denounce what happened in Wisconsin.

I had not seen John Liu in a while.

Comparing the Liu Inquiry to a Soldier's Hazing


Chinese-American leaders came to the defense of the embattled city comptroller, John C. Liu, on Thursday, comparing the federal inquiry into his campaign fund-raising to what has been called a hazing campaign before the death of Pvt. Danny Chen. .... Mr. Liu’s campaign fund-raising troubles were fanned by potent forces determined to prevent him from becoming mayor in 2013. ..... invoked Private Chen, a Chinatown native who apparently committed suicide in Afghanistan in October after being subjected to harsh treatment by fellow soldiers .... “I see another assassination. This is a character assassination. Worse than death, you lose your good name.” .... The news conference was the first time some of Mr. Liu’s ardent backers had voiced their support in so public and unified a fashion, after months of what they said was nonstop negative publicity. .... Mr. Liu has not been accused of wrongdoing. .... “This is politics,” said Nora Chang Wang, a commissioner at the Department of Employment under Mayor Rudolph W. Giuliani. “When people see him as a viable candidate, such a strong solid candidate for that highest position in the city, in a way it’s a threat.” ..... Another former city official, Hugh H. Mo, a lawyer who was a deputy police commissioner under Mayor Edward I. Koch, said Mr. Liu had been denied due process. “I believe it is an effort to destroy John, who really represents the hopes and aspirations of Asian-Americans, and particularly Chinese-American immigrants,” Mr. Mo said. “We take pride in John.” .... the city’s leading Chinese-language newspaper, World Journal, sent three reporters, and two others, Sing Tao Daily and China Press, each sent two