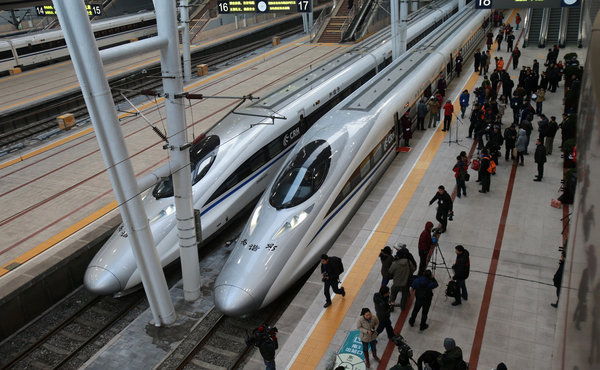 I don't see why land acquisition is a problem. The value of land on both sides of the track goes up. Does that not pay for the loss of land?


the world’s longest high-speed rail line, covering a distance in eight hours that is about equal to that from New York to Key West, Florida, or from London across Europe to Belgrade. .... 186 miles an hour ..... Guangzhou, the main metropolis in southeastern China. Older trains still in service on a parallel rail line take 21 hours; Amtrak trains from New York to Miami, a shorter distance, still take nearly 30 hours. ..... China has resumed rapid construction on one of the world’s largest and most ambitious infrastructure projects, a network of four north-south routes and four east-west routes that span the country. ..... the national network has helped reduce toxic air pollution in Chinese cities and curb demand for imported diesel fuel, by freeing up a lot of capacity on older rail lines for goods to be carried by freight trains instead of heavily polluting, costlier trucks ..... Debt to finance the construction has reached nearly 4 trillion renminbi, or $640 billion, making it one of the most visible reasons total debt has been surging as a share of economic output in China, and approaching levels in the West. ..... the high-speed lines, which haul only passengers ..... The high-speed trains are also considerably more expensive than the heavily subsidized older passenger trains. A second-class seat on the new bullet trains from Beijing to Guangzhou costs 865 renminbi, compared with 426 renminbi for the cheapest bunk on one of the older trains, which also have narrow, uncomfortable seats for as little as 251 renminbi. ....... The first line, from Beijing to Tianjin, opened a week before the 2008 Olympics; a little more than four years later, the country now has 9,349 kilometers, or 5,809 miles, of high-speed lines. ...... a country where four-fifths of new cars are sold to first-time buyers, often with scant driving experience ..... Flights between Beijing and Guangzhou take about three hours and 15 minutes. But air travelers in China need to arrive at least an hour before a flight, compared with 20 minutes for high-speed trains, and the airports tend to be farther from the centers of cities than the high-speed train stations.... Land acquisition is the toughest part of building high-speed rail lines in the West, because the tracks need to be almost perfectly straight ...... the 800-seat trains are often sold out as many as 10 trains in advance on Monday mornings and Friday afternoons, even though the trains travel as often as every four minutes, and even lunchtime trains at midweek are often full as well.