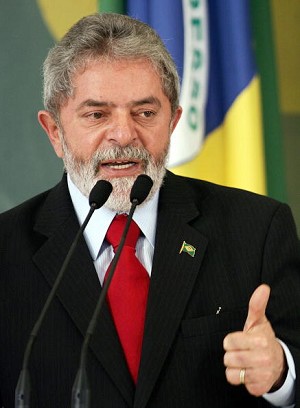 Lula's great work as president has its roots in when he joined the labor union and rapidly rose up its ranks. But much more attention has been paid instead to his earlier years, like when he quit school after only a few years. This is a man of tremendous people skills, and he spent decades sharpening those skills. He is more labor leader than mechanic.

Lula has proven to be the master of the ultimate soft skill. That is why he has proven to be a tremendous negotiator. He is a courageous man who has known not to posture, but instead to get things done. His pragmatism came from his realization that a president has no one else to blame. The president can make demands of no higher power. He simply had to get things done. If a labor leader who becomes president can not deliver for the poor, who can?

Lula's presidency has proven democracy has what it takes to deliver for the poor of the Global South. Democracy has the magic to deliver. It has also proven lifting the poor out of poverty is also great for the rich. It is win win. All boats can rise.


Brazil election: profile of Luiz Inacio Lula da Silva - Telegraph: when Lula was elected - to market panic ..... fiscally responsible policies ...... Rather than implementing radical left-wing reform, as feared, Lula adopted dark suits and a calm, pragmatic approach that allowed him to become a star of global diplomacy while reinforcing cooperation between the world’s developing nations ..... a “rock star” on the international stage who projected impressive charisma. ....... A gifted negotiator, Lula knew how to build unlikely alliances or cast off friends who had suddenly become liabilities ..... “I know how many slurs and prejudices I’ve had to overcome to get where I am ...... Social programs he championed have lifted 29 million people out of poverty ..... Lula’s common touch, with a vocabulary of the street, was a comfort to a population sick of bureaucratese ..... managed not one but two hosting coups, bringing the 2014 football World Cup and the 2016 Olym

Image via Wikipediapics to Brazil ...... At 21 he joined the union, and less than a decade later in 1975 he became its president .... He was the force behind big strikes in the 1970s that challenged the military dictatorship in power at the time. In 1980, he created the Workers Party ..... Lula has not said what he plans to do after stepping down, though speculation swirls he might accept a high-profile international post ..... his extraordinary early path to power is the subject of a movie, “Lula, the Son of Brazil,” which is his country’s official entry for Oscar glory in next year’s US Academy Awards.

Lula's Brazil: glitzy, rich, dynamic | World news | The Observer: the rich have not done badly either..... there is a certain something in the Rio air right now; a swagger that can be felt not only in Ipanema's luxurious nightspots, but also in the city's impoverished slums – favelas – and remote Amazonian towns where shopping malls and cinemas are sprouting from the ground with growing pace. ..... Lula will leave office after two terms with an approval rating of an astronomical 81%. ..... Lula's successor will be Dilma Rousseff, a former student rebel who rose to be Lula's chief of staff after spending three years in jail under the former military dictatorship. She has a reputation as a respected enforcer entrusted to lead the soon-to-be-ex-president's gigantic economic growth programme, pumping billions into social programmes and infrastructure works. .... Lula, a former shoeshine boy and fiery union leader ..... "When Lula took over it was as if the country was coming out of a war. And today things have stabilised. We are no longer known as the country of football and beautiful women. We are known as country that is economically strong."

In Brazil, there's life after Lula - The Globe and Mail: Ms. Rousseff, a former chief of staff and minister who has never held elected office ..... the South America nation of 196 million is riding an unprecedented wave of optimism. The investor-friendly economic management and redistributive policies begun under former president Fernando Henrique Cardoso and consolidated by Mr. Lula da Silva have helped to lift 20 million people out of poverty. Under Bolsa Familia, 12 million of the poorest people are paid to keep their children in school. ...... “Brazil is like India, a continent unto itself in terms of regional diversity, with tremendous growth, but also racial and economic disparities”

The Times: President Lula of Brazil blames crisis on 'white and blue-eyed': “This was a crisis that was fostered and boosted by the irrational behaviour of people who were white and blue-eyed, who before the crisis they looked like they knew everything about economics, but now have demonstrated they know nothing about economics,” he said, mocking the “gods of wisdom” who had had to be bailed out. “The part of humanity that is responsible should be the part that pays for the crisis,” he added. ..... “Our meeting in London has to be spicy, it has to have a bit of heat,” said the Brazilian leader —