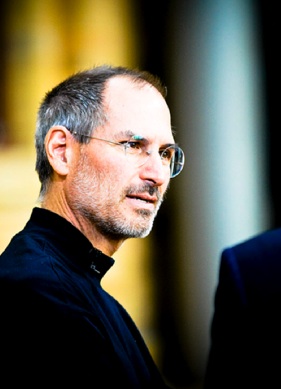 Wow. This guy shows no signs of slowing down. This dude Steve Jobs, CEO of the past decade, dubbed the most remarkable comeback story in the history of business, Larry Ellison's best friend, is just warming up, it looks like.

"There are one or more strategic opportunities in the future," says he. You got to watch out for those. Word is already out he wants to take another crack at the netbook. He could also be thinking in terms of the natural user interface, 3D computing, and gesturing as opposed to touching. Gesturing is cleaner.

Apple And Google: The Activation Pissing Match Continues: According to Jobs, Apple is now activating 275,000 iOS devices a day.
Steve Jobs: “Open Systems Don’t Always Win”: “Open versus closed is a smokescreen,” he argues. “Google likes to characterize Android as open and iOS as closed. We think this is disingenuous.” The real difference between the iPhone and Android is, he says, “integrated versus fragmented.”
Apple Q4: $20B Revenue, $4B Profits, 3.89M Macs, 14.1M iPhones, 4.19M iPads — All New Records: market cap ... $300 billion .... Apple sold more iPads than Macs for the first time ..... 3.9 million Macs — new record by over 400,000. 27 percent year over year growth. .... Double digit growth in both portable and desktop. iMac and MacBook very strong. .... iPod is still the top-selling MP3 player in most of the countries we track. .... 4.1 million iPhones versus 7.1 million a year ago. ..... 166 carriers in 89 countries for iPhone now. ..... Almost 4.2 million iPads sold — now in 26 countries. ..... 65% of Fortune 100 are deploying or trying out iPad ..... Expanding to Walmart, Target, Verizon, and AT&T stores now. ..... iOS sales 125 million last month cumulative .... Apple retail stores 3.57 billion revenue — new record ..... Our four China stores are the highest trafficked in the world ..... 317 stores worldwide now. .... 74.5 million people in stores last quarter ..... Cash now $51 billion. ..... This year, Apple generated 5 times the revenue and 10 times profit we did 5 years earlier. .... Android is becoming more fragmented by the day.... 7-inch tablets are “tweeners” too big for a smartphone, too small for a tablet....... “The iPad is clearly going to affect notebook computers.” I think the iPad proves it’s not a question of “if” but a question of “when”. Things will continue to change over the next few years. It’s surprising how much interest there is in business. “It’s being grabbed out of our hands.” From board rooms to nurses and doctors and hospitals. “The more time that passes, the more I am convinced that we have a tiger by the tail here.” This is a new model of computing that we already have people trained on thanks to the iPhone..... We don’t talk about unannounced products, but I’m happy to talk about Apple TV. We have gone to a streaming model — it’s complete streaming. ..... its 99 price point is very enticing..... its 99 price point is very enticing. ..... “We don’t know how to make a great smartphone for $50.” .... over $50 billion in cash now .... The money isn’t burning a hole in our pockets, we’ve been smart with it. We’d like to continue to keep our powder dry. There are one or more strategic opportunities in the future. ..... an advantage on the price point with the iPad ..... Part of it is that we engineered so much of it ourselves. We did the A4 chip. And we learned a lot from the iPod and iPhones. Others have to buy things on the market with middlemen, who take a cut. We’re efficient. This is a product we’ve been training for for the past decade.
Steve Jobs: Apple Has Already Sold Over 250,000 New Apple TVs
Steve Jobs: “The iPad Is Clearly Going To Affect Notebook Computers”: the iPad is practically the entire tablet industry right now
MacBook Air Apparent: I Have Never Used My Computer’s Optical Drive:The most recent rumors have Apple releasing a new, smaller MacBook Air that would have an 11.6-inch screen (versus the current 13.3-inch one). The thing may weigh in around 2 pounds (versus the current 3 pounds). And it may even have a new sort of solid state memory system that would allow it to be even thinner than normal, and faster to boot...... Why not just carry around the iPad? Because as great as it is, it’s still not nearly good enough to use professionally on a daily basis. Even if I were to carry around the keyboard accessory, it’s lacking some of the intensive multitasking properties I require .... Rumors for the new version suggest a much cheaper price. ..... MacBook Air (and perhaps a ChromeBook ..... lighten the load.
When Steve Jobs Rants, Visualizations Of His Words Materialize
Android Chief Andy Rubin Sends His First Tweet — And It’s Aimed At Steve Jobs: the definition of open: “mkdir android ; cd android ; repo init -u git://android.git.kernel.org/platform/manifest.git ; repo sync ; make”

: TweetDeck CEO Iain Dodsworth who isn’t happy with how the Apple CEO portrayed his company’s experience of coding for the Google platform.