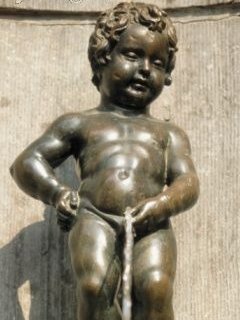 "Can I come in?" I opened the door slightly and said.

"You are the first person to show. Come in," said organizer Kaitlin Villanova from across the hall.

The Dumbo Loft is a great space. Free beer is a great idea. And Kaitlin announced later that Digital Dumbo was now "officially the number two tech meetup in the city," a designation I have been rooting for at this blog for months.

There is the usual working the room. You say hello. You ask, what do you do? You collect a few business cards. You meet people.

I walked over there. I tried to walk back, and got lost. And took the train.

Just before leaving I got in line to use the restroom. I was towards the back of the line. People were using both restrooms in gender neutral ways to speed up the line. When it was my turn, I went into the women's room. When I got out, there was no line, and a woman I had talked to for about five minutes early in the evening was right in my face, giving a mischievous smile.

Image via Wikipedia
"Did you pee on the seat?"

I opened the door.